I've been keeping this under wraps for a couple of months, but now the news has broken thanks to actor Michael Shanks (see Here) and the release of issue #20 of the official Stargate Magazine.

It is with great pleasure and not a little enthusiasm, I can say that Big Finish Productions, known for their excellent Doctor Who, Tomorrow People, Sapphire & Steel, 2000AD and Dark Shadows audio drama series are bringing the worlds of Stargate SG-1 and Stargate Atlantis to the audio realm - and I'm one of the writers.

More information will be up on BF's site soon; six titles (three SG-1, three Atlantis) have been announced for 2008. It's my understanding the plays will be available via download or on disc. There may be bonus content on the discs; but don't quote me on that.

The hour-long stories are a kind of halfway-house between a traditional talking book and a full-cast audio play. Each story has two actors - one lead voice, one supporting - in the same style as BF's recent Doctor Who: The Companion Chronicles series (for which I wrote the Brigadier story Old Soldiers, out now!).  The Stargate plays are all-new, original stories written specifically for audio. I'm joining Sally Malcolm (editor and writer at Fandemonium Books, publishers of the official Stargate novel series) and Sharon Gosling (former editor of Stargate Magazine, author of the Atlantis series guides and producer for the audios) to write this series.

These are the initial release dates, but I'm not sure of how correct they are, so consider them flexible: 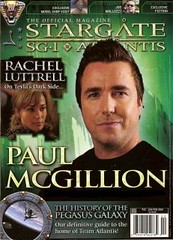 As mentioned in Stargate Magazine, Gift of the Gods is a season three story featuring Michael Shanks as Daniel Jackson, with John Schwab as Major Hunter. Shell Game is a tenth season story with Claudia Black as Vala Mal Doran and Shanks as Jackson.  I had a blast writing for Vala and Daniel, and I can't wait to hear the finished play; I'll talk more about Shell Game and my Atlantis audio Zero Point in the new year.

I can tell you that we've got a great spread of main cast members from both shows for this first six releases, and we don't plan on stopping there.  I'm really excited to be a part of this project and I know Sally and Sharon and the team at Big Finish are going all out to make this a hit.

If you'd like to know more, as mentioned there's a piece in the new Stargate Magazine - and issue #20 also features "Outsiders", an SG-1 short story by me...